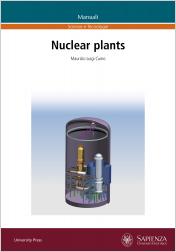 This book of the Publishing House of Sapienza University outlines the operative experience of a great number of nuclear power plants and devices of the nuclear fuel cycle. With main reference to nuclear plants of the so called third generation (Ill or Ill+, i.e. advanced ones) of the European Union and of Euratom research Centres the prospects of future plants of fourth generation (IV, years 2050s) are also described.

Large advancements have been obtained by extended cooperation of EU with USA, Japan and connections with Russia, China, India, Canada and other Countries. After Chernobyl (1986) and Fukushima-Daiichi (2011, 3 reactors) accidents with heavy consequences, people interest in nuclear energy decreased all over the world. This book examines in details such accidents to obtain safer designs Gen. IV reactors.

In 2003 an initiative of the DOE (USA Department of Energy) launched the so called Generation IV International Forum with 13 Countries (USA, England, France, Canada, Japan, South Corea, South Africa, Argentine, Brasil, Switzerland, EU with Euratom) to design and realise the future reactors of Fourth Generation to substitute third generation reactors at the end of their operative life. Lectors have so a description of the evolution of future reactor types and of prospects that nuclear energy may offer to mankind.