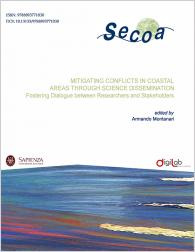 This volume is part of a series of publications on cross-national comparative research in the fields of global climate change, coastal areas, sustainable urban development and human mobility. These factors, are confronted with conflicts of interest which arise at both the local and the global level. The volumes being published in this series attempt to provide a contribution to resolving these conflicts. This multi-national and multi-disciplinary network was set up in 2009 on the occasion of the European Commission’s call for proposals for a Seventh Framework Programme (FP7) project.

Part One of this volume deals with the knowledge and topics addressed by those involved in knowledge dissemination, and considers the changes that have taken place during the past few decades, thanks to the introduction of ICT tools, which have also influenced the ability and readiness of public opinion to intervene in matters that are pre-eminently scientific. Part Two considers the potential of the new technologies and the limits they can impose on scientific dissemination. Parts Three and Four focus on how scientific dissemination was tested and evaluated by the SECOA’s stakeholders, who in this case were also the end users. Part Three recounts the experience of working with a middle school in Civitavecchia and a high school in Ostia. Part Four of this book deals with the activities of SECOA’s end users and the outcomes of a meeting held in India as part of a SECOA session.